How to Embrace Your Inner Crazy for Psychological Benefits

We’re all a little crazy:

Crazy drives innovation:
1.) Hunter Gatherers
2.)Strategic hunting, farming, first cities
=those with blunted social skills unlikely to survive.
=those who adapted the fastest and most at risk for psychiatric illness.

Good thing there are safe ways to use crazy

Your shadow: an exercise
A day without consequences:
eat without gaining weight
have an affair without complications
murder someone and they come back to life

Now have a conversation with that “person,” your shadow.

Create new stories, don’t tell yourself the same things over and over[6]

Step out of the box and make new emotion filled experiences.
You remember more when they’re emotional.

Michelangelo: Autism/forgot very routine self maintenance. Oftentimes when he would remember to take his shoes off, his skin would peel off with them.
Tesla: OCD/Germaphobe, wouldn’t touch round objects. Completed routine tasks three times before continuing.
Van Gogh: Epilepsy, potentially hypergraphia, a condition linked to epilepsy, mania, and an overwhelming urge to write. Cut off ear, committed suicide.
Howard Hughes: Germaphobe, extreme recluse in stress, OCD.
Beethoven: Probably bi-polar. Extreme prolific periods of creation (mania) followed by extreme depression.
Sir Isaac Newton: Thought to be bi-polar and a schizophrenic. Bouts of psychosis, impossible to get along with, and drastic mood swings.
Darwin: Agoraphobia, including visual hallucinations, hysterical crying, and nausea kept him bedridden for almost all of his famous journey on the Beagle.
Dostoyevsky: Epilepsy, and extreme neurosis, which he suffered from are analyzed in many of his works. 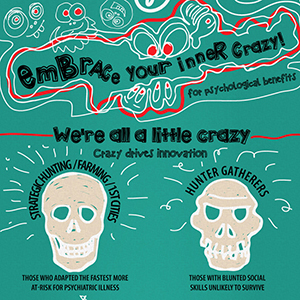