Social psychologists study the ways that culture and interaction form psychological perceptions, and how individual psychology comes together in large groups to shape collective thoughts and actions. They are most commonly engaged in research and advisory work, using their knowledge to help shape public behavior or explain social phenomena. 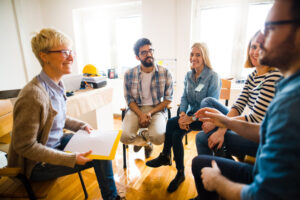 Since even before psychology became a formal field of study, philosophers and thinkers realized that what a person thinks can be influenced by what people around them think. Even more interesting, many began to believe that we all share a collective kind of thought. Carl Jung, who founded the field of analytical psychology, hypothesized that there is a vast collective unconscious that we all share, containing the archetypes and patterns of thought of our species. Instincts and urges arise from that shared consciousness. Crowds react in predictable ways because of it.

Social psychologists come at the field not through the door of individual thought and experience, but instead by considering the interaction and relationships between people. They also look at how culture and society are shaped by the overall blending of the elements of individual psychology.

That kind of data and research has enormous implications in fields ranging from consumer marketing to public health to electoral politics. That puts social psychologists in high demand in a lot of interesting and lucrative industries.

What is a Social Psychologist?

Like any branch of psychology, social psychologists also have sub-specialties in their field. They might choose to specialize in subjects such as:

With their advanced psychological training, social psychologists can unravel mysteries like racism, war, and bullying. They have all the training to understand both how individuals perceive and process information, and how to understand the effects of environment and interaction on those thoughts. It’s a powerful form of psychology with clear applications in dozens of industries and social services.

Is a social psychologist a doctor?

Social psychologists are not considered to be doctors, although some of them may hold a doctoral degree. Their area of expertise is in psychology, not medicine, so they do not have the type of diagnostic and treatment options that medical doctors do. Most of them do not work in direct patient-facing roles in any case.

What Do Social Psychologists Do? 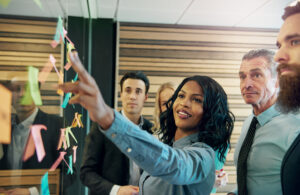 Instead, their expertise is in research, academic studies, and consulting. They might advise corporate leadership on the best ways to handle negotiations with a worker’s union, for example. Or they could take a hard look at an upcoming marketing campaign for hidden gotchas that might offend some cultural groups. Or they might advise non-profit administrators or government officials on how to deal with major societal issues.

Social psychologists offer insights and solutions to some of the most pressing problems society faces today, from what drives people to join violent gangs, to vaccine avoidance, to race and gender-based discrimination.

Most social psychology is all about observation. Social psychologists sift through newspaper articles, design and digest public surveys, and interview individuals to get the big picture. They also put together and run experiments to test theories. The infamous Stanford Prison Experiment, where they unlocked the mysteries of how otherwise apparently normal people might easily be convinced to do terrible things to one another, is one example. Another was the Asch Conformity experiments, which showed how social pressures can influence people to knowingly make wrong choices.

You have to have a knack for looking at the world around you and deciphering why people act the way they do to become a good social psychologist. Once you go down that path, you’ll find explanations that will amaze you, and ways to help society improve as a whole.

What is an example of social psychology?

Social psychology studies the psychological components of interactions between people and the collective attitudes and perspective that come from the combinations of all those perspectives. Examples include the attraction and perception of attractive qualities between people; patterns of aggression and dominance in society; perspectives on what constitutes polite behavior in a society; and collective beliefs such as religion.

Getting The Right Education to Become a Social Psychologist

You have to start your path to an advanced degree with a bachelor’s-level program first, however. Bachelor’s in psychology degrees are some of the most popular in the United States according to the National Center for Education Statistics. They will set you up with the basic history, principles, and processes of psychological thought and study to prepare you for a higher degree.

In some cases, though, a master’s degree may not be enough. A doctorate in psychology explores all of these same subjects, but in greater depth. A doctorate is considered the minimum education in most states for becoming licensed as a psychologist, which is needed if you plan to do any clinical practice. In some cases, states require licensure even for psychologists who do not directly offer clinical services.

A doctorate also puts you through the dissertation process, a tough, multi-year research project that is used to demonstrate your original ideas in the field and produce a paper that is considered publication-worthy. It may well define your entire career and make you an expert in your particular specialization of social psychology.

Whether at the master’s or doctoral level, you’ll want to be sure to choose programs that are fully accredited by the American Psychological Association (APA). That stamp of approval shows that the education is up to standard in the psychological community, as well as being a requirement for licensure.

Explore Degree Programs Near You!

What Do Social Psychologists Study?

They also go on to more specific classes in topics specific to social psychology like the study of race and class, multicultural perspectives on mental healthcare, and stereotypes and prejudice. 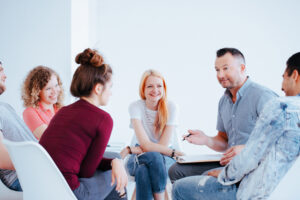 With the enormously broad range of applications available to social psychologists, career options can be found all over the map. Any industry or organization that needs to understand how environment and human interaction shape perspectives and behavior can use a social psychologist to help sort out the mysteries.

That leads to interesting roles ranging from political consulting to technology design. Social psychologists are becoming instrumental in figuring out how new social media services affect society and how best to handle the rampant spread of online disinformation. They are working with public health agencies to figure out vaccine hesitancy and resistance to masking. Some of them are at the forefront of the social justice movement, unlocking ancient human prejudices and figuring out how to counteract them for a more equal society.

Some social psychologists will have to meet state licensing requirements in order to practice. This standard varies by state, depending on their legal definitions, so you should check with the state licensing board to see if your job will fall under those requirements.

Whether a license is required or not, you won’t have trouble finding work as a social psychologist in an increasingly connected world.

Where do social psychologists work?

Social psychologists can find a wealth of different jobs available after graduation in all kinds of fields. Many work in state, local, or federal government agencies. Others find positions in corporations, working with product development or public relations teams. But maybe the majority of social psychologists can be found in academia, either teaching or conducting important research that helps shape the future of the field.

How much do social psychologists make?

In the Bureau of Labor Statistics (BLS) salary records, social psychologists are not ranked separately from other types of psychologists. For the field as a whole, the median salary level for 2020 was $80,370. This comes pretty close to the findings of a survey conducted by the APA specific to social psychology specialists, which found a median of $85,860 per year. Those in the top ten percent of the profession, with the highest levels of education and experience, could make more than $132,070 according to BLS.