What Can Humans Learn From Animals?

Why are animals more humane than humans and what we can learn from them?

○ Siegfried and Roy
■ First performers to use big animals in Las Vegas
■ Revolutionized the big entertainment events
● 30k live shows involving elephants, tigers, lions, macaws and cheetahs
■ Roy worked with the big cats, raising them from infancy
● He bonded with them by having them sleep next to him for their first year

○ Ace, John and Christian the Lion
■ Ace Bourke and John Rendall purchased the lion cub from Harrods dept. store in London in 1969
■ They raised Christian until he became too big
● George Adamson helped him return to the wilds of Kenya
● He assembled a “man-made” pride for Christian
■ A year later, Ace and John visited their old friend in the wild
● The stunning reunion was recorded as Christian ran to hug Ace and John
● They were immediately accepted by other members of his pride
■ 40 years later, the video was introduced on YouTube
● Now 100 million views

○ Koko the gorilla and Francine Patterson
■ Friendship began in 1972 when Francine was in graduate school
● She was doing a study of animal intelligence
● She began working with 1-year-old Koko
■ Their friendship has lasted more than 30 years
■ Francine has taught Koko sign language
● Koko has now mastered over 1,000 signs
● Understands more than 2,000 words
● She often initiates conversation with humans
● She talks about her thoughts, feelings, wants and needs
● She is more advanced in sign language than any other non-human

○ Pavlov’s dog
■ Pavlov was the discoverer of “classical conditioning” aka “Pavolvian conditioning”
■ He discovered this type of conditioning by accident
● Original test: measure the salivary secretions of a dog at the sight of food
● He began to notice the same salivary response with things that were associated with food
○ The bowl, the lab assistant, sounds
■ Pavlov devoted the rest of his life to the study of associative responses
● In studies, he used a bell as neural stimulus
● Every time the dog was fed Pavlov rang a bell
○ The sound of a bell meant food
■ Eating + the sound of the bell = the dog salivating
■ In turn – the sound of the bell = Salivation
○ Many of the same principles apply to humans

○ Many of the same principals apply for humans as for animals
○ Classical conditioning: utilized prolifically in advertising
■ Marketers are experts and knowing what drives consumers to buy
● Sight or smell of food, candy or beverages
○ Produces saliva and desire
■ Even the sight of a logo can trigger urges to purchase
● Ex. McDonald’s golden arches
○ Symbolizes food and makes people feel hungry
○ McDonald’s has successfully conditioned the vast majority of the world

Life Lessons From Animals
○ Take naps
■ Naps boost alertness, increase creativity, and improve memory
○ Social bonds increase life and reduce stress
■ Bats, elephants, dolphins, horses, hyenas and chimpanzees all have best friends
■ Humpback whales reunite with their friends every summer
○ Keep moving!
■ Sled dogs can run 1,150 miles in 10 to 17 days
■ Exercise reduces stress, improves sleep quality, decreases chance of depression, and improves quality of learning
○ Be excited to learn
■ Cows heart rates go up and they move quickly after achieving tasks
○ Be Empathetic
■ Dogs will lick and nuzzle anyone nearby who is crying or in distress
○ Be fair
■ Dogs have a keen sense of morality that boosts overall development and helps establish a society
○ Practice Mindfulness
■ Being mindful of your surroundings can actually change the way you perceive the passage of time
○ Share information
■ Whales share information about finding new food sources as resources become scarce
○ Don’t give up so easily
■ Salmon swim thousand of miles upstream to spawn at the same place they were spawned 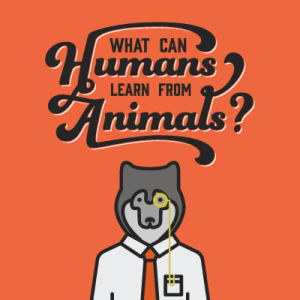