Share this infographic on your site!
Most of us have heard the long-held theory that the order in which you and your siblings are born has an impact on your personality as an adult. While it may not hold up for every person in the world, studies have indicated there is a great deal of truth in that theory.

Average children per family in U.S.

Gap when birth order is restarted

These children quickly learn how to please their parents — becoming conscientious, organized and reliable and serving as surrogate parents to younger siblings.

Once the “most trusted man in America,” Cronkite famously reported on the assassination of President John F. Kennedy and the 1969 moon landing.

Winfrey went from local Chicago TV reporter to one of the most influential (and wealthy) women in the world.

Churchill’s steadfast refusal to consider defeat helped inspire the English during World War II; he’s regarded as one of the greatest wartime leaders in history.

Difficult to categorize, they avoid being boxed in and have a more go-with-the-flow attitude than their older siblings. They tend to be unbiased and levelheaded and are good at negotiations, most likely from playing mediator between their siblings.

Percentage of middle children who put money into their savings accounts each month (more than their older and younger counterparts). They are also more likely to be asked for money from a sibling.

Percentage of middle children who remain faithful to their partner

(compared to 65% for first-borns an 53% for youngest children)

A TV journalist known for her celebrity interviews, Walters was the first woman to co-host a nightly evening news program.

A president whose life was cut short by an assassination, one of Kennedy’s biggest achievements was avoiding a nuclear incident during the Cuban Missile Crisis of 1962.

Leader of the civil rights movement of the 1960s, King’s message of non-violence in the face of attempts at repression helped galvanize popular thinking in favor of his movement.

These children usually receive the least discipline, the fewest responsibilities and the biggest audience. As a result of being babied, they tend to be tender and altruistic. They learn that being funny and adorable gains attention and approval.

Percent of youngest children who suffer from nightmares, compared to 25% of oldest children.

The beloved American author and humorist has been called the father of American literature.

The younger of the two English princes has provided tabloid fodder over the years with his somewhat reckless behavior.

These children are typically mature for their age due to time spent with adults. Many are high achievers, with a few rebelling and following their own path.

Top careers for only children

The best-selling solo artist in the history of music, Presley remains one of the most important figures in American culture.

A singer and actor expelled from school as a teenager, Sinatra defined an entire genre of popular music and represented a particular swanky lifestyle.

America’s longest-serving president, Roosevelt grew up with a mother who lavished attention on him. 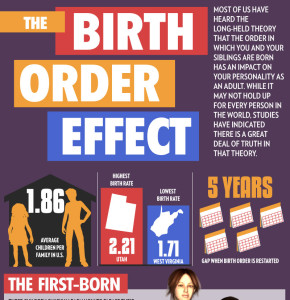