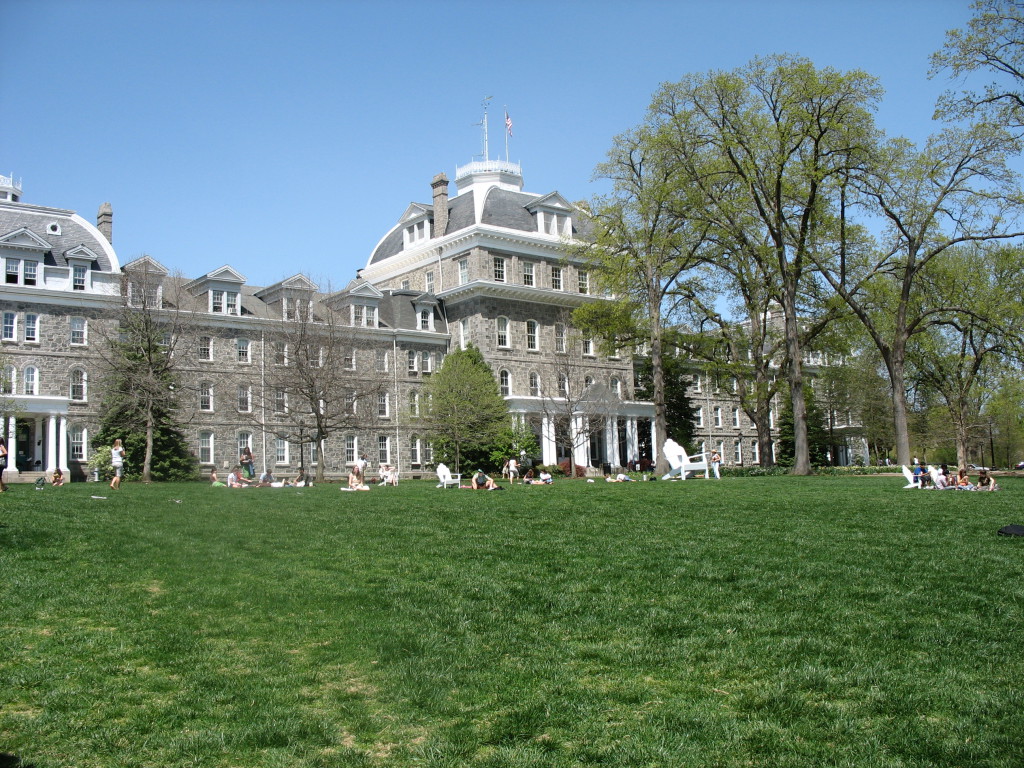 In 1860, members of the Religious Society of Friends raised $150,000 to establish a school for Quaker children. The group was led by Benjamin Hallowell, an educator, Samuel Willets, a businessman along with Lucretia Mott and Martha Tyson who were anti-slavery activists. In 1865, the first President of the college, Edward Parrish, traveled for months on horseback to raise money for the school. President Parrish was trained as a pharmacist but served as a professor of ethics, chemistry and physical science. He saw value in higher education being made available to all people and spoke of eliminating the belief that higher education was only for the aristocratic.

The college is named for a 17th century Elizabethan manor house, known as Swarthmoor Hall, that stood near Ulverston, England. In the 1850s, the home was the center of the Quaker movement. In 19th century England, the word “swarthmoor” meant “black moor.” However, in plain-speaking America, it was decided that a word that rhymed with “more” should be spelled that way, regardless of its origins.

In 1862, a meeting held at the Race Street Meeting House in Philadelphia created the “Friends Educational Association.” The group’s purpose was to raise funds to establish a boarding school in order to provide a liberal education to both sexes. The board was made up of equal numbers of men and women. Unlike other schools whose oversight was handled by a Board of Regents that met quarterly or annually, Swarthmore was owned by stockholders. There were 6,000 who paid $25 per share to begin the college and the school was incorporated in 1864 with the passage of a special act of the legislature of the commonwealth of Pennsylvania allowing women to own property.

The first class graduated from Swarthmore in 1873. Five women and one man received baccalaureate degrees, one of which was President Edward Magill, who served as the second president of the college, daughter, Helen. She later became the first woman in the country to earn a Ph.D.

During World War II, the college cooperated with civil defense, the Red Cross and first-aid training in order to provide non-military support services. In addition, the college moved to a year-round class schedule to accelerate graduation for those who may be drafted. This schedule lasted for three years, yet the college still suffered when a quarter of the faculty left to join the war effort. In 1946, enrollment grew tremendously as soldiers returning from the war took advantage of the G.I. Bill.

In 1969, students occupied the Admissions Office demanding that more black students be admitted. Eight days after the occupation, President Courtney Smith died suddenly in his office and Robert Cross was named the new president. In 1971, files stolen from the FBI office in nearby Media, Pennsylvania, revealed that the Afro-American Student Society at Swarthmore was under surveillance. The files showed five years of Swarthmore activities and disclosed the names of staff members who acted as sources for the FBI.

In 2003, Alice Paul Hall on the Swarthmore campus became the first college residence hall in North America to install a green roof as part of the 2002-03 Environmental Studies Capstone seminar. Students chose to study green roofs as party of the course and the engineering department initiated plans to build a shed behind Papazian Hall to hold lumber. The two projects merged, resulting in the historic green roof being installed.

Today, there are 1,534 students enrolled at Swarthmore, enrolled in more than 40 courses of study. More than 600 courses are offered on campus each year.

Admission to Swarthmore is based on several criteria, including:

In order to apply to Swarthmore, students must complete an application for admission and provide guidance counselor recommendations, high school transcripts and midyear grades, if they have not yet graduated from high school. Students must also provide standardized test scores and two academic teacher evaluations.

Students transferring from another university who have completed the equivalent of two or more semesters of university level work must apply for admission. Applicants must have an outstanding academic record and present official transcripts from all colleges and universities attended.

Tuition at Swarthmore College is $47,070 per year for full-time undergraduate studies. Students who wish to take more than five courses must pay $5,884 per course. Financial aid is available in the form of grants, scholarships, loans and federal work study programs. About 52 percent of students attending Swarthmore receive some form of financial aid from the college itself and about 70 percent share more than $40 million in scholarships, loans and work opportunities. Students must complete the Free Application for Federal Student Aid (FAFSA) as well as the college financial aid application in order to qualify.

The Academic Psychology Program at Swarthmore College is designed to provide an understanding of the principles and methods of psychology. Students are provide the tools and knowledge for psychological inquiry and approaches to problems that are encountered as part of humanity, social science and life science. Students interested in the program should complete Introduction to Psychology or they may take the first-year seminars on Happiness or Early Social Cognition. A student may also qualify for the program by scoring a “5” on the Advanced Placement test or a grade of six or seven in the International Baccalaureate Program. Courses for the program include:

Students must also complete practicums, independent research and a thesis.

Students who are interested in psychology will find that the Academic Program at Swarthmore College provides them with the advanced tools and knowledge to move into a new career or to advance in their current career.