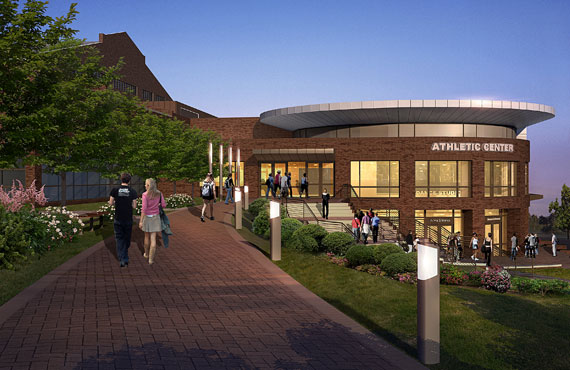 Davidson College was established by Presbyterians of North Carolina in 1837. During that year, The Concord Presbytery purchased 469 acres of land from Brigadier General William Lee Davidson, a Revolutionary War commander for whom the college was named. Initially, the college struggled financially until they instituted “The Scholarship Plan.” The program allowed students who hoped to attend Davidson to purchase a scholarship for $100. The program was instituted in the 1850s and the scholarships could be redeemed up through the 1870s.

In 1856, Maxwell Chambers donated $250,000 to the college. The donation made Davidson the wealthiest college south of Princeton and The Chambers Building was named in honor of the gift. In November 1921, the Chambers Building was destroyed by fire and rebuilt eight years later with a gift from the Rockefeller family. It continues to be the primary academic building.

In 1924, James Duke established the Duke Endowment, providing millions to the college. In 2007, the endowment established a $15 million pledge to assist students with the elimination of student loans. Women had been accepted into classes at the college since the 1860s, but were not permitted to earn degrees. The first women to attend classes were then-President Kirkpatrick’s five daughters and they mainly enrolled to boost class sizes during the Civil War. Women were permitted to enter programs and earn degrees in 1972 with Marianna “Missy” Woodward, an art major, becoming the first woman to earn a degree from Davidson in 1973. She was the only woman in a class of 217 people.

Until 2005, the Board of Trustees was required to be made up only of Christians. That year, the board voted 31-5 to allow 20 percent of the board to be non-Christian. John Belk, one of the heirs of the Belk Department Store, resigned in protest at the decision, ending a more than 60 year affiliation with the college.

The Honor Code, which every student is expected to sign, brings special freedoms on campus. Students who adhere to the code are provided take-home tests and unproctored, self-scheduled examinations during finals period. An annual ceremony each year is a distinctive moment in the first-year student’s experience at Davidson.

Today, there are more than 1,900 students enrolled at Davidson College and it is ranked among America’s strongest and most selective liberal arts colleges. The college is governed by a strict honor code and is alma mater to 23 Rhodes Scholars.

Davidson College is accredited by the Southern Association of Colleges and Schools – Commission on Colleges. Accreditation means that the college meets or exceeds rigorous criteria as determined by the accrediting agency that demonstrates standards of excellence in higher education.

First year students may apply to Davidson College using the Common Application. A writing supplement is required as part of the application. Students may also complete the online Davidson College application and provide the necessary documentation. Students must provide a secondary school report, a mid-year school report, two academic teacher recommendations and a peer recommendations. Official ACT or SAT scores must also be provided.

Transfer students should complete the Common Application and the transfer writing supplement. An official high school transcript as well as official college transcripts from all schools and universities attended must be provided. Transfer students must provide two academic evaluations and a transfer college report. SAT or ACT scores should also be provided. A peer recommendation is suggested but is not required. Transfer courses must be consistent with Davidson academic objectives and students must have earned a “C” or better in transferred courses.

Full-time tuition at Davidson College is $46,966. There is an orientation fee of $150 fee required of first-year students and transfers which is included in the Fall Semester billing. Additional fees may apply depending on the program the student chooses.

In 2007, Davidson became the first liberal arts college in the country to eliminate the need for student loans in financial aid packages. All students who demonstrate need are offered grants or student employment. Through the Davidson Trust, the college meets 100 percent of the student’s calculated financial need. Students may choose to borrow educational loans, but the college does not submit applications on the students behalf for federal or private student loans.

Students must complete the Free Application for Federal Student Aid (FAFSA) in order to qualify. Approximately 40 percent of students who attend receive need-based aid while more than 50 percent receive aid from some source.

At Davidson College, the Psychology major prepares students for a variety of professions. Using the American Psychology Association’s guidelines for undergraduate psychology programs, Davidson provides the tools students need to think critically and gain an understanding not only of others, but also of themselves as well.

Students are provided instruction in a broad discipline that combines a scientific approach with the study of human behavior as well as how physiological and cognitive processes affect underlying behavior. Students gain accurate, up-to-date knowledge in subfields in psychology, research methods, philosophical and ethical issues. Students gain knowledge through laboratory experiences, field research and internships.

Students have the option of completing a senior thesis as part of the capstone requirement. This provides students with the opportunity to explore a topic of their own choosing and honing the skills learned throughout the program. Students who plan to apply to graduate programs should consider a senior thesis as it enhances their candidacy and may determine whether graduate study is the right path. Students who choose the thesis option should be able to schedule their time, work around the schedules of assistants, subjects and their chair as well as seek hospitality and resources in professional settings. Students must be willing to extend themselves well beyond classroom work and impose evaluative structure on their own work.

As one of the few colleges in the United States with a policy that eliminates student loan debt for graduates, Davidson College has taken steps to insure that those who complete their programs are better prepared for the modern workplace. Davidson College offers online courses that provide flexibility for students whose work, family or social obligations make it difficult for them to attend traditional classrooms. In addition, Davidson’s strict Honor Code has been a central philosophy to campus life, confirming that students adhere to a code of academic integrity and providing a foundation that allows them to live and study in an open environment.