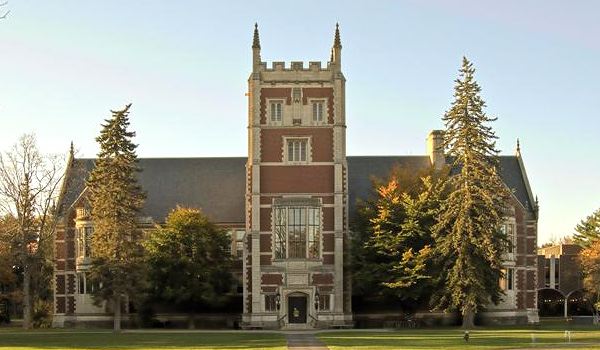 The Bowdoin College story begins even before it became an institute of higher learning. Pierre Baudouin, a French Huguenot, emigrated to the United States in 1690, living briefly in Portland before moving to South Boston, where he became a wealthy ship merchant. After his death, his son, James, anglicized the family’s French last name, spelling it “Bowdoin” and pronouncing it “Bo-dun.” James Bowdoin I became one of the wealthiest merchants in Massachusetts and his son, James Bowdoin II was elected the Governor of Massachusetts in 1785, just after the American Revolution.

A scholar, James II balanced politics and assisting in the management of his father’s vast holdings with scientific pursuits. In 1794, Bowdoin College was chartered by the General Court of Massachusetts with Governor Samuel Adams signing the bill. At the time the charter was signed, Maine was still part of the Commonwealth of Massachusetts. James Bowdoin II provided lands to the college which were sold to raise funds. It was President Joseph McKeen who spoke the phrase that would become the mission of the college, urging students to work “for the common good.” The first students signed the Matriculation Book, a rite of passage that still exists today.

The eight students that were members of the first class studied, worked and lived in Massachusetts Hall along with the faculty and staff of the college. The youngest of those eight students, George Thorndike, planted an acorn he found during the first year, and the Thorndike Oak still stands today, a landmark for the college.

James Bowdoin III, who had no children, endowed the new college in honor of his father, leaving them an extraordinary library and collections of Old Master paintings, drawings, minerals and scientific equipment.

In 1820, as part of the Missouri Compromise, Maine achieved statehood. In 1825, two of the best-known American writers graduated from Bowdoin College. Nathaniel Hawthorne and Henry Wadsworth Longfellow, although they graduated from the same class, did not become friends until later in life. Longfellow returned to Bowdoin in 1829 as a professor teaching modern languages and acting as the librarian.

The Crash of 1837 almost eliminated the college endowment fund, setting the stage for several years of financial concern. In 1852, Franklin Pierce, an alumni of Bowdoin’s class of 1824, was elected President of the United States. The Civil War began in 1861 and Bowdoin had a large number of graduates enter the military. At least 18 alumni fought for the Confederacy. In 1882, Memorial Hall was constructed to commemorate the 288 known Civil War veterans on the Union side.

During World War I, the campus became part of the war effort as recruits in Maine were brought to Brunswick for training. During World War II, many students left the school for the Armed Forces. However, a Navy radar school and Army-Air Force weather unit came to the campus during the war. The college became co-ed in 1971 with Susan Jacobson becoming the first woman to earn a degree.

Today, more than 1,800 students attend Bowdoin and the school offers over 40 majors.

Bowdoin College is accredited by the New England Association of Schools and Colleges. Regional accreditation means that the college meets the rigorous standards set by the association and that students are provided an education that meets the certificate of excellence issued by the accrediting agency.

Students entering college for the first time are admitted based on a variety of factors including:

Students must complete the Common Application and provide official transcripts.

Students who have never taken classes at another college or university are considered first-year students. Any student who has enrolled in a degree-granting program at another college or university and successfully completed classes at that school is considered a transfer student. Students who have already earned a bachelor’s degree are not admitted to Bowdoin. Transfer students must have a GPA of 3.0 or higher or earn grades no lower than a “B” in all classes at other universities.

Full-time tuition at Bowdoin College is $47,744 per year. There are other fees required depending on the program selected.

Scholarships, grants and student employment are the principal sources of financial aid for Bowdoin students. About 200 entering freshmen receive financial aid offers, ranging from $3,000 to $56,000. Bowdoin’s need-based financial aid packages do not include student or parent loans. Students or parents may elect to apply for student loans on their own to help finance an education at Bowdoin.

In order to qualify for aid at Bowdoin College, students must complete the Free Application for Federal Student Aid (FAFSA).

Bowdoin offered its first psychology course in 1904 and has grown along with the industry. Students develop an understanding of the psychological make up of other humans through studies of neurophysiology, human language, basic perceptual processes as well as developmental and clinical psychology. The program emphasizes scientific methods of inquiry and analysis. The program consists of ten courses and students must earn a C- or better in all courses in order for them to be counted toward the major.

Students have the opportunity to undertake independent study in an effort to gain additional information related to their academic experience. Independent study must include an original contribution by the student and must be approved by the student’s advisor. Students should find a faculty member who is willing to mentor them for the project. A final report of the independent study is submitted to the advisor by the last day of classes in the term the study is completed. All research must be performed with the ethical principles provided by the American Psychological Association.

Many students incorporate community projects into their curriculum, partnering with agencies found locally or around the globe. Students are probing topics on human health, understanding Alzheimer’s and treating anxiety as part of their independent study.

Bowdoin does not offer online courses or an online Psychology program. However, they do offer the ability for students in the major to undertake independent study in an effort to gain a hands-on feel for the subject. Bowdoin University offers a high-quality education with the student’s best interest in mind.